It is Friday afternoon. The morning has been quite busy at the clinic, 22 patients. Especially since Maria has been teaching our nursing auxiliary class most of the morning. So besides being the doctor that does the consultations (the CHO is out due to family issues, said he would be back today, but not seen yet), I also covered the pharmacy. Luckily Morlai, our nursing aid was there to help me!
A father comes in with his 5-year-old son, Amadu. The boy was playing with a small piece of a toy, like a small rubber. He was trying to whistle with it, when it suddenly got in his throat. He had been coughing. It just happened this afternoon.

The boy is sitting next to his father and we are able to take his vital sings. He coughs once or twice. When I check his lungs, they are clear. We are hoping it is stuck in his oesophagus, so Maria gives him some biscuits and water. After observing him for some time, he seems to be fine. His mother, who is one of the nursing auxiliary students, comes out of the class, as the lesson has finished. The whole family goes home, with instruction (if cough continues or fever come, do come back). 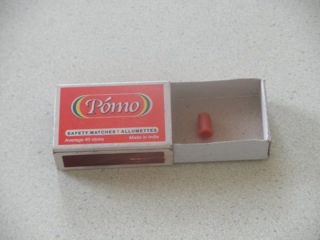 On Monday Amadu and his father come back. He is coughing a lot and sometime makes a whistling sound when breathing. When I check him I confirm what the father tells me.

That means the rubber went to his lungs. It can course a lot of problems there, and is difficult to get out.
Under anaesthesia I do give it a try, but I do not see the rubber. But this makes him cough even more, unfortunately not coughing up the rubber ☹.  I contact the bigger hospitals in the capital city (Children’s hospital and Emergency hospital, but neither have a bronchoscope), maybe the government hospital in Freetown. So I tell them to go there tomorrow and write a small note. When he is fully awake, the classes are over and Amadu and his parents go home.
We clean up the last things in the hospital, when a motorbike comes. It is Amadu’s father. With a big smile he shows a matches box with in it…. The rubber.  At home Amadu coughed again after drinking and it came out. He will be fine!